A director has been given a suspended prison sentence and two firms have been fined after a worker was killed when glass panes fell on top of him while unloading a shipping container from a lorry.

Tawanda Chamwandayita, from Edgbaston, Birmingham suffered fatal crush injuries when units of glass fell on top of him while unloading materials from a shipping container.

The glass fell against his leg, knocking him off the rear of the lorry where he fell to the ground in an incident on Walsall Road, Birmingham on 26 October 2017.  Mr Chamwandayita, 37, was killed when approximately 17 glass panes fell on top of him from the lorry. 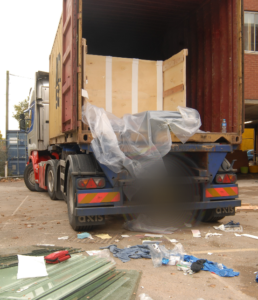 Inexperienced and vulnerable workers, some of them just 17-years-old, were working in dangerous conditions with no supervision, inadequate equipment and without any planning or risk assessment in place.

Evergreen Construction (UK) Limited was appointed as the principal contractor but failed to take action to ensure the safety of the workers. The client, Leyton Homes (Perry Barr) Limited (previously known as Hilux Developments Birmingham Ltd and Fast Item Residential Limited) had engaged their own contractor to arrange the delivery and unloading of the container full of large and heavy items, including the glass.  The principal contractor was on site but failed to do anything to ensure that the unloading operation was properly planned, appropriately supervised or carried out safely.

Jalal Rana, managing director of Leyton Homes (Perry Barr) Limited, watched the glass be unloaded from the lorry but did nothing to ensure systems were in place the protect the workers. There was no consideration of the competence of the contractors being used or the safety of the work.

Jalal Rana, of Walsall Road, Birmingham was found guilty of breaching Section 37 (1) of the Health and Safety at Work etc. Act 1974. He was sentenced to nine months imprisonment, suspended for two years, and ordered to pay £57,171.95 in costs at Birmingham Crown Court on 20 January 2023.

HSE inspector Edward Fryer said: “This case highlights the importance of engaging competent contractors and making sure that roles and responsibilities are clearly defined. Management arrangements need to be clear between clients, contractors and principal contractors so that health and safety arrangements can be properly planned, coordinated and implemented.

“All parties are required to ensure that safety arrangements are in place and followed. This was a wholly preventable incident which led to the death of Tawanda Chamwandayita in tragic circumstances.”