A construction company based in Chesterfield has been fined after a subcontractor hired to complete work on a roof fell from the roof joists to the concrete floor below, sustaining life changing injuries.

Nottingham Magistrates’ Court heard that, on 19 June 2019, Bobby Oldham Construction Limited (BOCL) were contracted to complete work on a domestic extension at Mona Road, West Bridgford, Nottingham. The work was to complete an extension to the rear of the property, which contained a skylight and wooden joists.  Work had progressed to the point where roof joists were being attached. The joists were accessed using a ladder, which then led to an unprotected trestle platform. The subcontractor was sat astride one of the joists when it gave way causing him to fall. He landed on the concrete floor below sustaining serious injuries including brain trauma and a broken neck. 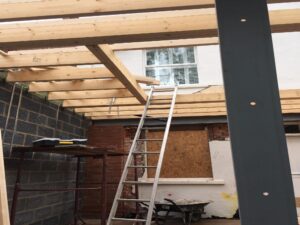 An investigation by the Health and Safety Executive (HSE) found that had the company properly considered the risks associated with this type of work, and planned the work at height more carefully the incident could have been easily avoided. The trestle platforms were missing suitable edge protection, and there was an absence of other suitable fall mitigation measures such as airbags. The work was not supervised, which would have identified the unsafe working methods, which could then be challenged by the company.

Bobby Oldham Construction Limited (BOCL) of Market Street, Staveley, Chesterfield, Derbyshire pleaded guilty of breaching Regulation 4(1) of the Work at Height Regulations 2005. They were fined £8,000 and ordered to pay costs of £3,515.

Speaking after the hearing HSE inspector Phill Gratton said: “This was a tragic and wholly avoidable incident, caused by the failure of the host company to implement safe systems of work, and failure to ensure that work at height was properly planned and appropriately supervised.

“This risk was further amplified by the company’s failure to undertake a number of simple safety measures including conducting pre-start checks on the training of workers, planning work to ensure that working methods were safe, and supervision to ensure that dangerous working methods could be observed and challenged.“